Regional Hospice patient and her family receive a dazzling welcome to Broadway’s ''Frozen: the Musical!''

This June, the stars aligned for Regional Hospice and Palliative Care (RHPC) patient, Michelle Duchon, 41, and her family. When Michelle was first admitted to our out-patient program, she shared with her Regional Hospice Social Worker, Nadine Finger-Thomas, her desire to take her nine-year-old daughter to a Broadway show at the end of summer. 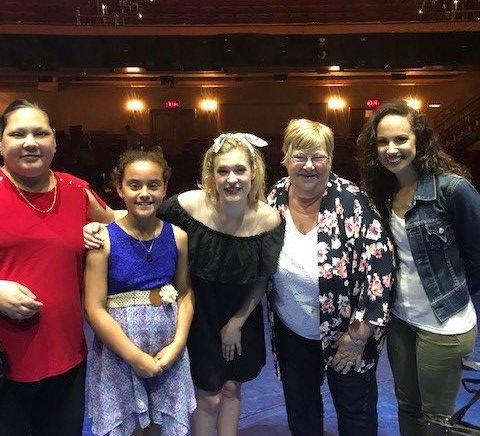 Michelle and her family on stage with the cast of “Frozen: The Musical!” on Broadway

After speaking with her nurse, however, the RHPC team realized that Michelle probably wouldn’t be able to get into the city at that time, due to her disease progression and the pain that came along with it. Everyone understood that to make this mother-daughter experience happen, it had to be arranged quickly.

A flurry of calls were made and emails were sent to our network of supporters. And incredibly, within a short time, everything began to fall into place.

On Tuesday, June 11 – just two days after the Tony Awards – we learned that one of our supporters had Broadway tickets for Michelle to see “Frozen: the Musical!” the very next day. In addition to this, they generously arranged lunch for her and her family at Serendipity 3, the iconic New York City eatery known for its decadent desserts.

Early the next morning, Michelle’s wish began to materialize.  Her nurse, Kimmy, and social worker, Nadine, met her to help her get ready for the day.  Michelle, along with her daughter and mother, were transported to New York City for an afternoon of food and entertainment in the Theater District.

The day just kept on getting brighter. Yet another Regional Hospice supporter stepped in with a generous gift of coveted backstage passes. After the performance of Frozen: the Musical!, Michelle and her family were unexpectedly escorted backstage where they met the cast who graciously gave them souvenirs from the show to bring home with them.

There’s nothing like the experience of Broadway with its lights and color and bustling energy. During this spectacular week in June, our supporters were the stars who made Michelle’s wish possible. We are always so grateful for the compassion and kindness of others. These shining memories for Michelle and her daughter and mother are precious gifts that time won’t ever fade.

Regional Hospice and Palliative Care (RHPC) has served Fairfield, New Haven, Hartford & Litchfield counties with nonprofit home hospice care for over 30 years. In 2015, RHPC opened the state-of-the-art Center for Comfort Care & Healing. This family-centered hospice residence is CT’s first and only private-suite facility, servicing patients and their families from throughout the country, especially in New York State and Connecticut. RHPC’s mission is to provide exceptional end-of-life care, comfort and compassion to infants, children, adults and their families with a dedicated staff of professionals. (www.RegionalHospiceCT.org)

Our new development office is now open on Greenwich Avenue! 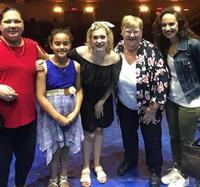