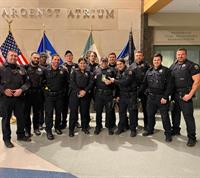 The Greenwich Police welcome the public to join the celebration of the 125th Anniversary of the Department on Saturday, October 16, 2021, for an unforgettable evening of dinner and dancing at the Riverside Yacht Club that will include an Honor Guard Procession, Bagpipes, Awards, Silent and Live Auctions, and Live Music by ETA. This evening will be a special acknowledgment of the past, present, and future of our brave men and women in Greenwich law enforcement, keeping our families and Town safe for everyone. Proceeds will go to the Greenwich Police Department Scholarship Fund, a nonprofit 501(c)(3), awarding scholarships to Police Officers' college students who qualify by ability and character.

"As a police department, it's important for us to celebrate this Anniversary, especially now. It's been a different year due to COVID-19 and the many other stressors police officers are dealing with every day," Heavey said. "We want the residents of Greenwich to join us in paying tribute and recognizing our Officers and staff who strive to keep Greenwich safe for everyone."

Guest tickets start at $500, and there is an opportunity to underwrite an Officer's ticket for $250. Patron Tickets are also available and will include a Patron's Cocktail Party on Thursday, September 30 at 6:30 pm at Greenwich Historical Society. Sponsorships are available for businesses who wish to participate. To reserve your tickets or become a sponsor, please go to:
https://www.gpdscholarshipfund.org/policemans-ball.

Covid protocols at the time of the event will be followed.

Chief James Heavey and the Department are marking the Anniversary with the theme of 'Honoring Our Past and Embracing Our Future.' "We are proud that the Town of Greenwich Police Department has earned the reputation of being a well-trained and responsive professional organization over the past 125 years," said Chief of Police James Heavey. "We strive for excellence and have demonstrated a sustained commitment of service to the public. I am very appreciative to be a member of this family – past and present – and I am equally pleased that we can celebrate this milestone together. We look forward to the history we will write together in the years ahead."

History of the Greenwich Police Dept.
In 1896 "Watchmen" were appointed after residents realized the need for more efficient police protection in Town. They were tasked with watching the stores along Greenwich Avenue at night. The Greenwich Police Department was officially formed in 1906. Some eleven years later, on June 1, 1918, Joseph J. Cornelius was sworn in as the first full-time Greenwich police officer. The Department received its first patrol car in 1922, and the first Police Station opened in 1939. In its early days, the Department was almost entirely composed of native Irishmen or Irish American men. The first woman police officer was hired in 1947, and the first Black officer in 1951. In 1960, the underwater rescue unit was formed, and three years later Marine Division was officially created. In 1967, the Youth Division was formed. Currently, there are 152 sworn officers in the Department.

For more information about the GPD: https://www.greenwichct.gov/345/Police. 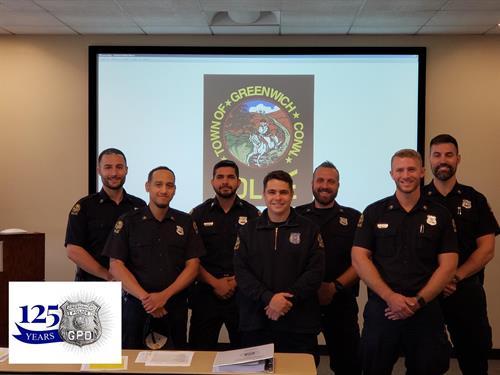