Our meet your town official series featured Town of Greenwich Director of Environmental Affairs, Patricia Sesto. She provided updates and important information in our "What You Need to Know About the Check Out Bag Initiative” community meeting on June 11 at the Greenwich Water Club. Below is a recap from Greenwich Free Press. Please comment to this post with your questions and feedback. 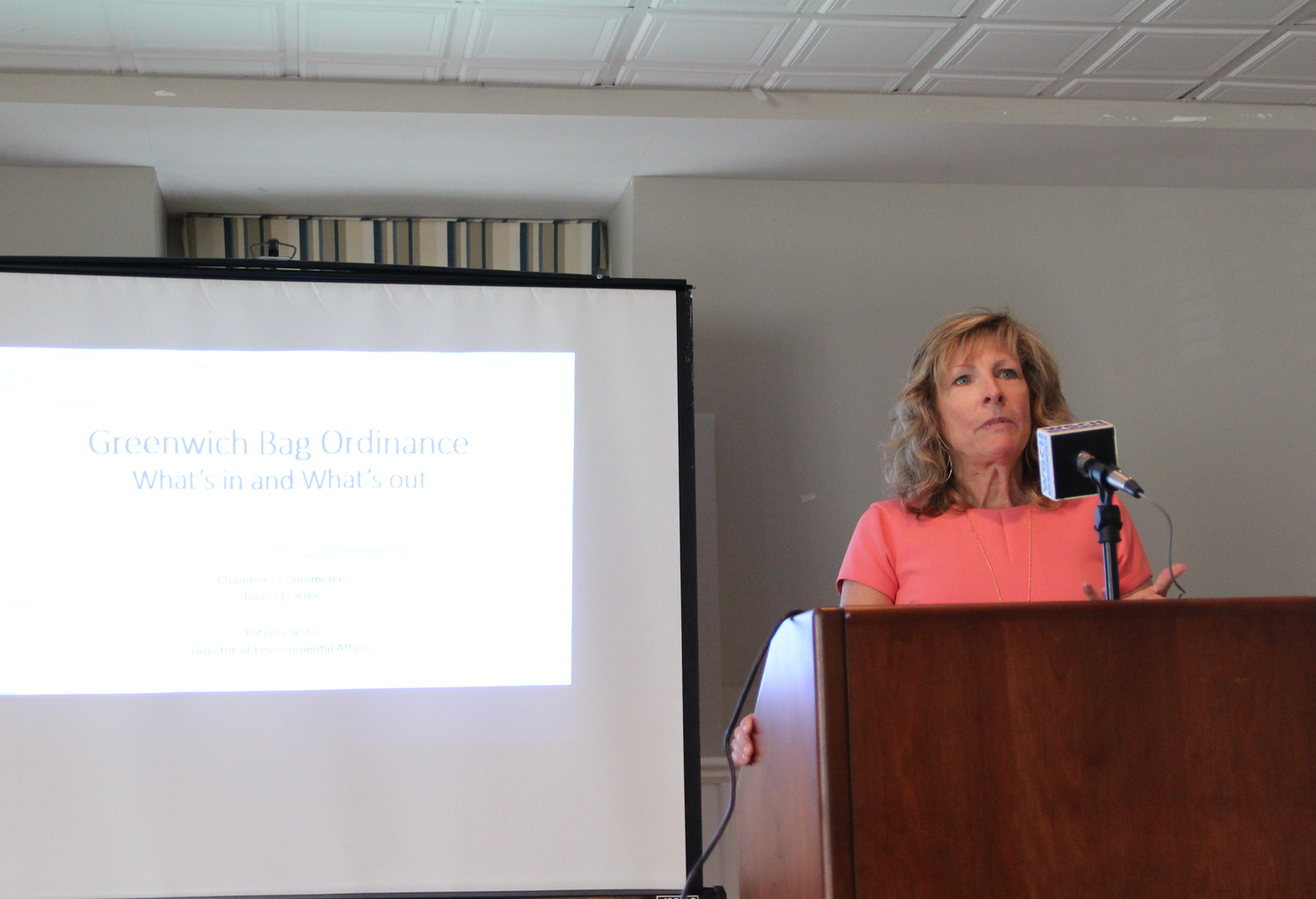 On Monday morning Greenwich’s Director of Environmental Affairs Patricia Sesto gave a talk organized by the Greenwich Chamber of Commerce at the Greenwich Water Club.

Sesto, who now leads both the Conservation Commission and the Inland Wetlands and Watercourses Agency, said she inherited the implementation of the ordinance banning plastic bags, which goes into effect on September 12, 2018, but that she fully supports it.

“I had nothing to do with having this ordinance passed, but I am very pleased,” she said.

Sesto said the ban addresses the damage done to the ocean and Long Island Sound by plastic bags, which not only don’t decompose, but kill wildlife that interprets the plastic as food and die when it gets stuck in their intestines.

She said micro plastic particles outnumber plankton six to one, and that toxins adhere to micro plastics and enter the food chain, where they are ultimately ingested by people. She said floatables ensnare, suffocate and cause internal damage to wildlife.

“Sunken plastic coats the Sound’s floor,” she continued. “Shellfish and rooted plants are blocked from natural substrate. This eliminates critical defenses against hypoxia and pollution absorption.”

It’s not just an environmental issue. The plastic are disruptors of the endocrine and reproductive systems, infertility and are a possibly linked to some cancers.

Further, she said the ban acknowledges that aquaculture is the largest area of farming in the state, spanning 60,000 acres. “We need to protect this as an economic asset,” she said.

Also, she said plastic bags jam up the recycling machinery and mostly are not allowed in the recyclable stream.  In addition plastic bags clog up sewage treatment plants and storm sewers.

Enforcing the Ban. Sesto said the Conservation Commission is tasked with enforcement of the ban, and that at first, a warning will be issued. A second incident will result in a$150 fine, and subsequent fines will be $250.

To give local businesses a heads-up, Sesto said the Town is in the process of sending a mailing to 2,700 local businesses detailing the ordinance and its implementation. Also, she said high school students are delivering flyers throughout town.

“History has shown that this change can be made smoothly and efficiently, and that 40 communities in Massachusetts have done it with minimal enforcement. “The best enforcers are customers,” Sesto said.

After Sesto’s presentation, the audience of about 20 gave feedback and asked questions.

Clare Kilgallen said that families accompany their children to the first day of school in the fall, and that might be an opportunity to give away reusable bags and incentivize families.

She also suggested adding information about the ordinance to the tax bills, but Sesto said unfortunately the dates did not coincide.

Laura Gladstone of Fiscal Freedom for CT, formerly known as Fiscal Femmes, pressed Sesto for details on the costs of implementing the ordinance, asking exactly how much the mailing to retailers will cost. Sesto said she did not have the exact figure, but would find out.

Gladstone, who has been a vocal opponent of the ban, calling it a “nanny tax” and a “regressive tax on low income residents,” asked Sesto if she was aware that some grocery stores already take the plastic bags back.

In response, Sesto acknowledged that to be true, but the extent they’re recycled is questionable, and that even if the stores recycle them, it’s as little as 1% to 3% that are recycled.

Lastly, Gladstone asked who would report violations to the Conservation Commission.

“So people walk around and tell on other people? That’s nice,” Gladstone said.

Gladstone said her group has heard complaints from local businesses upset about the upcoming ban.

On the Fiscal Freedom for CT website, a post published shortly after the meeting described Sesto’s presentation as “very biased and full of inaccuracies regarding the plastic bag ban in Greenwich,” and rather than address concerns of small business owners, it “pushed the BYO Greenwich agenda.”

The post also said, “Using children to go out to ‘inform’ our local businessmen about this new law is highly inappropriate.”

Lastly, the post says, “Ms. Sesto was excited to report that ‘straws were next’ to be banned.”

In fact, what Sesto did say was in response to a comment from a woman who said she’d been in California and Florida where bans on plastic straws are growing.

“Straws are the next villain on the horizon. I heard on the radio the other night about a restaurant using pasta as straws,” Sesto said. “Just don’t cook it first!” she joked, adding, “Straws are terrible and they are given to us whether we ask for them or not. So there are campaigns to say, ‘I want no straw with that.'”

Sesto said on average in the US, people use 300 bags each, and that 18 million bags are being used a year in Greenwich.

She said that volunteers with BYO Greenwich worked hard over about 18 months to get approvals including the RTM who passed the ordinance in March 2018, albeit with no fee.

“The high school students said this is our tomorrow and plastic bags don’t have a place in it,” Sesto said, referring to about 40 students who turned out with posters and spoke in favor of the ordinance at the RTM meeting.

Explaining the necessity for a ban, Sesto said, “Public education is not enough. We have so much on our plates to learn about. This just doesn’t generate enough mental reaction to get us there.”

Mary Shaw Marks, a member of BYOGreenwich reminded Sesto that the ordinance has a three year sunset clause.

“We’ll need hard numbers including current distribution of plastic bags and paper in order to evaluate. Only the town can ask for that. We tried but we’re not getting a lot of feedback,” Marks said. “It would be important to ask for that now and again in three years. My suspicion is there will be a wholesale transition from plastic bags to paper bags, which was not the intent. A fee would have made all the difference,” she said referring to the RTM vote which declined a 10¢ fee in favor of no fee.

“I fear the Whole Foods model of double bags, and volumes of paper going out the door,” Marks said. “The intent is to bring your own bag.”

“If you put it in a bag to give to a customer, you’re included,” she said, adding that even a doggie bag from a restaurant can no longer be plastic.

Reusable Checkout Bag defined. A bag is considerable if it is able to carry 22 lbs 125 over a distance of at least 75 ft, and be made from plastic, has a minimum thickness of 12 mil.

“You can have fun while being eco-responsible,” Sesto said. “There are so many cool bags out there. And you don’t need to think of it as just bags for the grocery store. There are bottle carriers for the liquor store, for example.”

There will be some exemptions for hardships, including giving retailers time to exhaust their existing supplies of plastic bags, and that there may be other unique circumstances. In those cases, businesses can fill out a form available from the conservation commission and online.  “If there is no reasonable alternative, we will accommodate.”

“Regional retailers are used to paper bags and many already comply. The community supports the change. If people are griping on the sidelines, I don’t know about it,” Sesto said. “We have had very little push back on the change”

Sesto said questions can be directed to bagordinane@greenwichct.org and there are details available at BYOGreenwich.org


One of the Chamber’s missions is to be a conduit between the business person and Town Government. We are pleased to collaborate with Town Hall for these community presentations.