The Greenwich Plan of Conservation and Development (POCD) is in the process of creating a blueprint for our future – a new blueprint that will guide the Town in its decision making for the next 10 years. A Plan of Conservation and Development is a community vision that is intended to guide the Town’s physical and economic development for the next 10 years. The POCD will result in a set of policies that direct future growth and development. Additionally, the Plan can lead to potential strategies that will help effectively guide Town leaders with making substantive and thoughtful decisions for the community.

The Town is committed to involving residents and business owners and operators in the process in order to craft a community vision for Greenwich’s future. Ultimately, the POCD will be approved by the Planning & Zoning Commission and presented for adoption at the Representative Town Meeting. 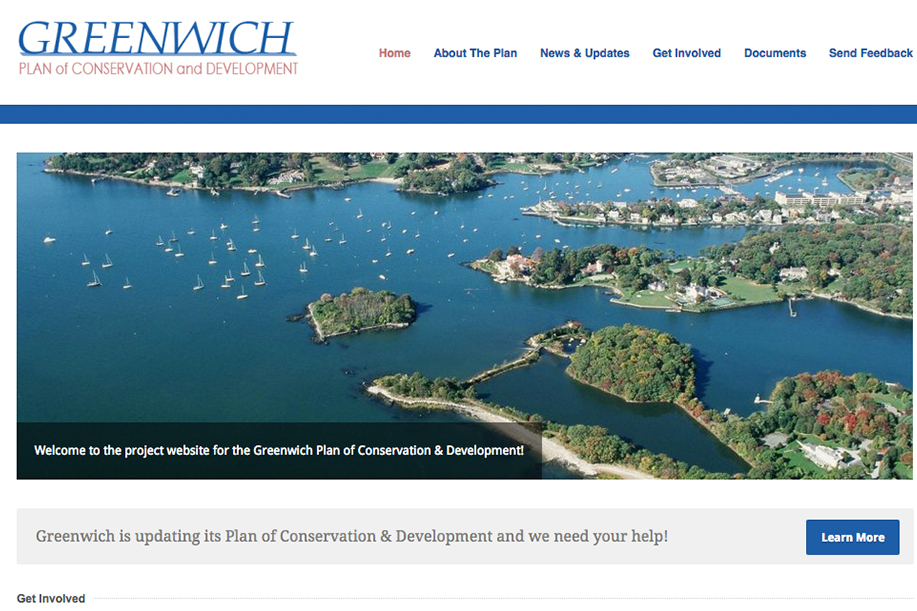 Stay Connected and Get Involved!
Explore and bookmark the Town of Greenwich POCD interactive website where you can find Community Meetings, Surveys and even interact with a "social map" where you can view real concerns and comment directly on a map of Greenwich - a great way to get involved and stay involved!

This transparent process was presented at the Community Workshop Jan. 17th, by the agency hired by our Town of Greenwich. We saw that our community is interested in building a better Greenwich and is in no shortage of suggestions. Everyone was given a questionnaire and every voice was heard and counted. Nearly 100 issues or concerns were noted and ranked by our community audience.

The two-hour workshop wrapped up with an outpouring of our primary strengths and assets - from our desirable location and rich history to the people in our town who make a difference and continue to give so much to make our town extraordinary.

Below is a recap from the first of three workshops covered by Greenwich Free Press
Challenges to Greenwich Avenue Emerge as a Theme during POCD Workshop
By: greenwichfreepress | January 17, 2018


About 100 hardy residents headed to the Cole Auditorium at Greenwich Library on a cold Wednesday night for an input session on Greenwich’s Plan of Conservation and Development.

On the Town of Greenwich website, there is a link to all things POCD.

The meeting was run by consultants from Houseal Lavigne, Associates, a firm based out of Chicago. The tab for the consultant, for the year and a half process is $175,000.

John Houseal, AICP principal, founder led residents in an exercise in which all were invited to list what they think are the top five issues Greenwich faces.

When one jaded resident raised a hand and said their concern was the Town’s penchant for hiring outside consultants “in order to defer doing anything.”

Mr. Houseal said, indeed, he was familiar with “communities burnt out being asked what needs to get done and nothing gets implemented.”

Houseal called on residents one at a time, and it wasn’t long before the answers started to take on themes. Once Mr. Houseal had about 100 issues projected on the screen, he asked residents to winnow down their issues of concern to just three. At that point a show of hands revealed a shorter list of priorities:

From there, Mr. Houseal asked those in attendance to image what would be their immediate “action steps” if they were in charge of running Greenwich.

The responses drew laughter and nods of agreement. One suggestion was to evict the Board of Education from the Havemeyer Building and and re-purpose the building for performing arts.

Elaborating on that thought, another resident suggested making that building a practice facility for Greenwich High School students, and, in turn lure teens back to Greenwich Avenue.

With suggestions multiplying for ways to draw people to Greenwich Avenue, it was suggested it be made into a pedestrian only street.
Anticipate Facebook news feed changes. If you Follow Greenwich Free Press on Facebook, select the “See First” option under “Follow” or you may no longer see our posts in your news feed.

Another resident suggested moving forward the “Tranfo development” on Benedict Place, a stone’s throw from Greenwich Avenue. (The reference is to a proposal by Joseph Tranfo, who owns ten residential properties on Benedict Place and Benedict Court. He seeks to demolish the buildings and develop three apartment buildings with a total of about 70 units with underground parking for residents and the public and community meeting space. He seeks to turn the 77-spot municipal parking lot at Lewis and Benedict Place into a park and give back the parking via the underground level of parking.)

Continuing on the theme of improving Greenwich Avenue, there was suggestion to find the owners of buildings on Greenwich Avenue and fine them for leaving the retail space empty drew a round of applause and laughter.

Another suggestion that drew applause was to loosen restrictions on the types of businesses permitted to operate on Greenwich Avenue. Mr. Houseal said regulations on the books can prevent residents from getting what they want.

One couple said they’d like to change the rules about AirBnb. They said many apartments and townhouses are up for rent on a nightly basis. “It brings nothing to the town and undermines affordable housing. People are buying properties just to Air BnB them.”