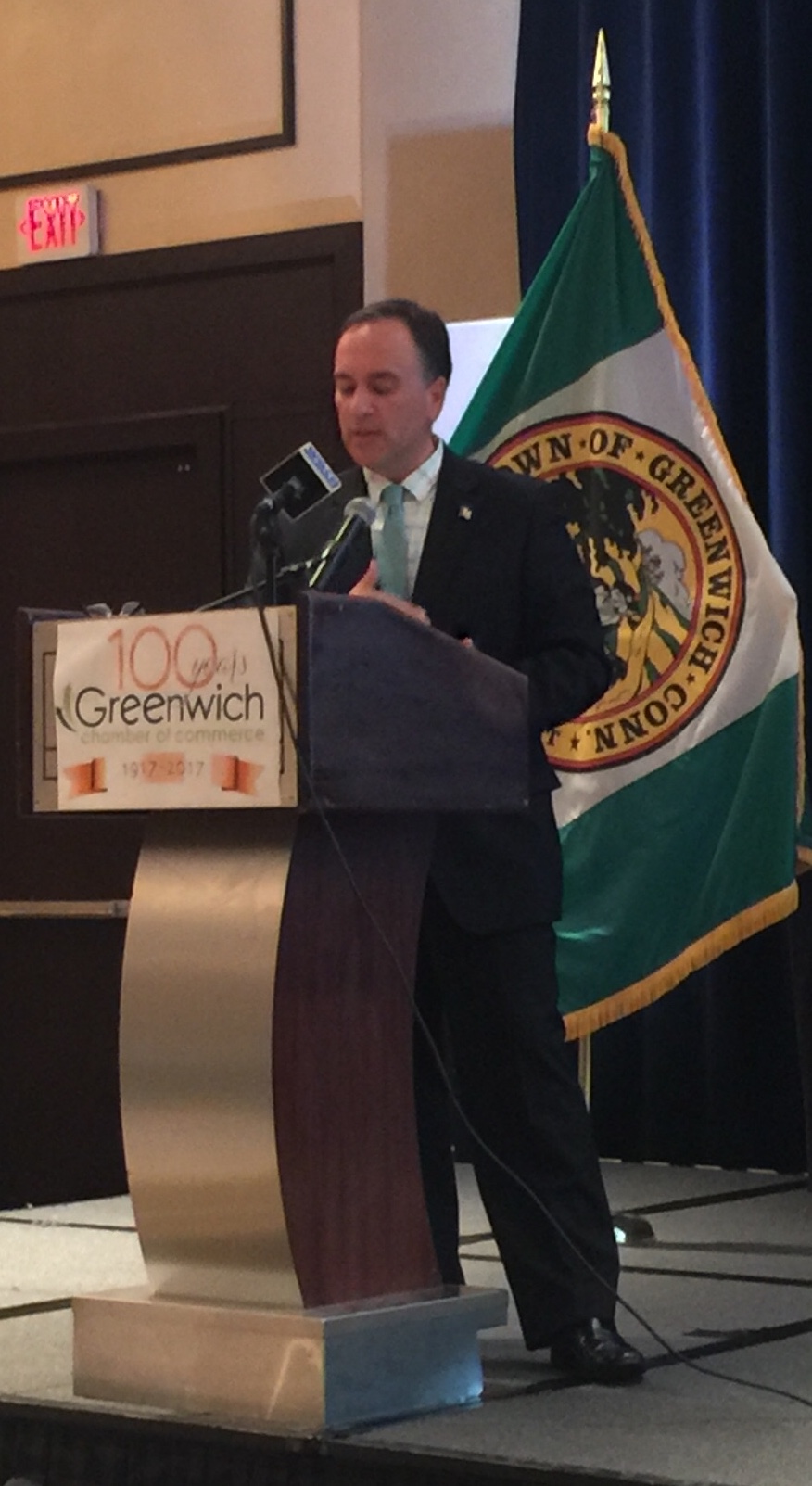 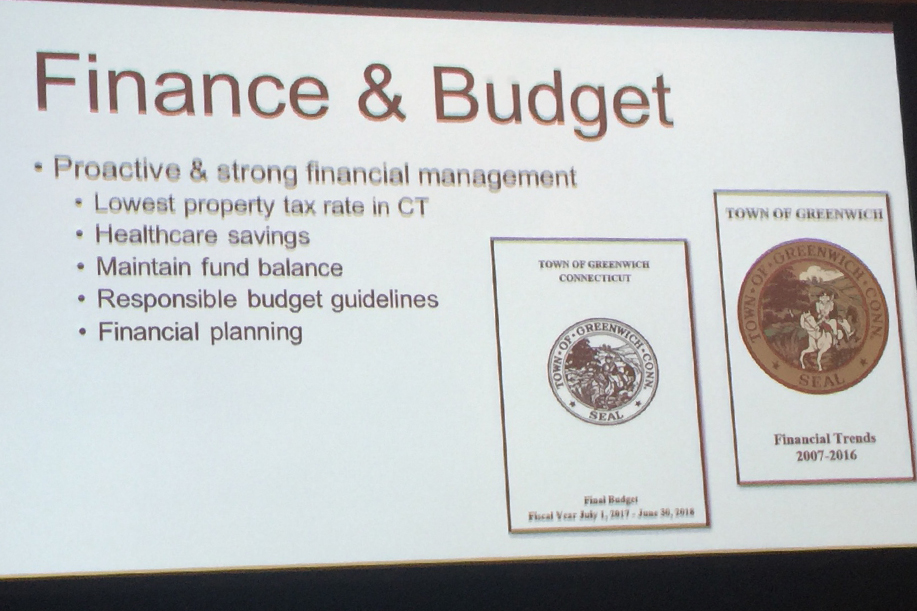 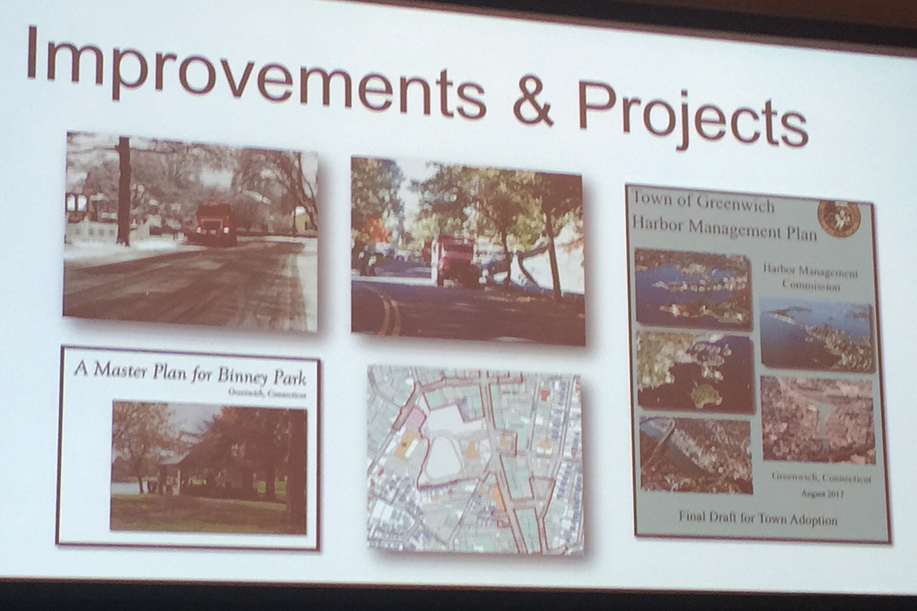 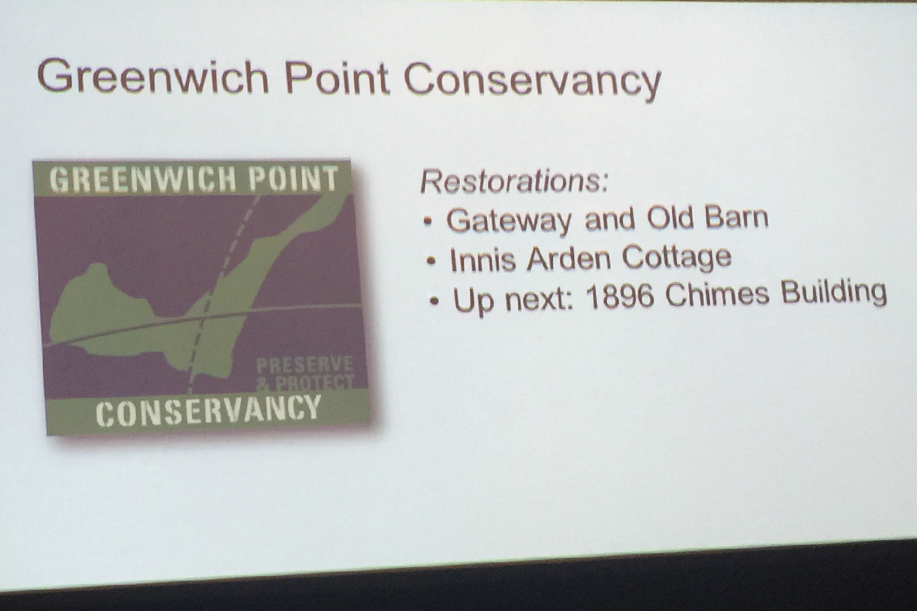 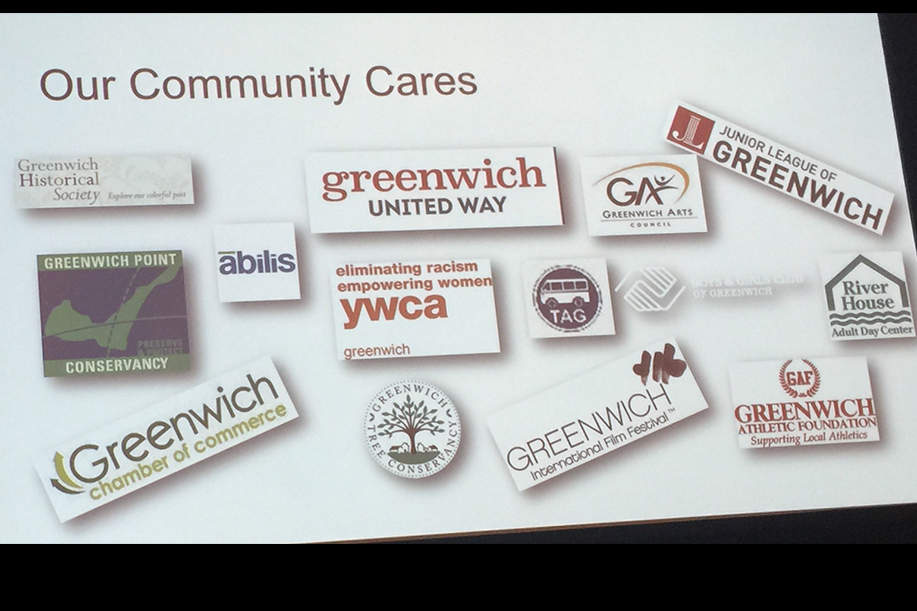 Here is a recap of our State of the Town Luncheon by the Greenwich Time:

GREENWICH — In delivering his annual state of the town address Friday, First Selectman Peter Tesei noted he was not just speaking as an office holder, but a fifth-generation resident of the town.

“We are a community of doers,” Tesei said. “We continue to look forward positively, optimistically and enthusiastically. Greenwich is a unique community that offers unlimited opportunities for those of us who live and do business here.”

The event was put together by the Greenwich Chamber of Commerce and was sponsored, as it has been for the past six years, by Webster Bank. Attendance was more than 125 at the Hyatt Regency in Old Greenwich.

The address is a tradition for the Chamber. It is not designed as a political event but this year comes less than two weeks before Election Day where Tesei will seek a sixth term in office. His Democratic rival, Sandy Litvack, had asked for a chance to speak as well, but chamber President and CEO Marcia O’Kane declined, saying it was not meant to be a debate.

The Democratic Town Committee will hold a forum Monday night at Town Hall featuring Litvack to present the party’s case before the election on Nov. 7.

The audience included Selectmen John Toner and Drew Marzullo as well as state Sen. L. Scott Frantz, R-36th, and state Reps. Livvy Floren, R-149th, and Michael Bocchino R-150th. During his remarks, Tesei thanked the delegation for their work in passing a state budget this week. He also said Greenwich is still in good fiscal shape, despite continued financial problems in Hartford.

“We lost millions in state aid and there are dozens of cities and towns throughout the state that are facing fiscal meltdowns and will continue to do so even though the legislature has put political associations aside and finally developed a budgetary compromise,” Tesei said. “Greenwich is fortunate that through financial prudence it is able to weather the fiscal perfect storm.”

Tesei praised the work the town had done with the Board of Estimate and Taxation, Board of Education and Representative Town Meeting to maintain modest budget increases and allow the town to have one of the lowest mill rates in the state, while making it through cuts in state funding.

“As we work on the budget proposal for 2018-19, we are mindful there will be continued fallout from Hartford,” Tesei said. “We anticipate working towards a budget increase of less than two percent over this year’s combined town, schools and capital budget of $420 million.”

Tesei spoke about projects ongoing throughout town, including the ongoing improvements at Binney Park in Old Greenwich, and spoke several times about Byram, noting the new municipal pool would be complete for the next beach season. He told people who haven’t visited Byram Park recently to go and see how much progress had been made.

He highlighted Byram as a thriving part of town and even put in a plug for millennials to buy their homes there.

“Byram has so much potential for people who look to move into a desirable neighborhood,” Tesei said. “You have the library. You have a wonderful beach and park. You’ll have the new school soon … Byram may be the avenue to come into Greenwich if you’re single or soon to be partnered and want a place to live.”

Tesei’s focus returned to Old Greenwich and the future of the Eastern Greenwich Civic Center. He mentioned the discussion with “an energized group of residents” who have proposed using the existing footprint to add in features like a field house and increased field capacity.

Looking to the future, Tesei talked up what he called the “Triple P” of public/private partnerships, such as the deal with the Junior League of Greenwich to help build the new pool, and with the Greenwich Athletic Foundation to fund improvements at the Dorothy Hamill Rink and new bleachers for Greenwich High School’s gymnasium. He also mentioned the Greenwich Point Conservancy’s work and the Dalio Foundation’s funding of improvements in Byram Park.

“Local government here in Greenwich would not be as successful and responsive to citizens’ needs as it is without the residents who volunteer their time and, more importantly, their money,” Tesei said. “There are several Triple Ps that are providing essential services and programs and facilities that we might not be able to afford otherwise or, at the very least, take years to implement.”

Tesei also discussed work toward the development of the 2019 Plan of Conservation and Development, which is rewritten every 10 years. He said a consultant had been hired to develop the next POCD.

“Investment in our infrastructure and planning for the future are critical to Greenwich’s survival as a premiere business, residential and cultural destination,” Tesei said. “The POCD is an opportunity to look back at what has worked and what hasn’t in terms of meeting community needs. It will provide the framework to develop a blueprint for how you and I want the town to look in the years to come.”

In noting his priorities for the future, Tesei pledged to continue the town’s fight against the opioid epidemic and to help victims of domestic violence through supporting YWCA Greenwich’s 24/7 services. The Y’s current budget includes a $60,000 grant to fund a program for town schools about dating violence. Tesei said, if the opportunity is available, he will look to fund the program at a higher rate in 2018-19.

After the speech, Litvack said if elected he would immediately get to work developing plans to boost economic development by attracting new tech and media businesses, which he said would thrive in Greenwich. He also said he would oversee a traffic plan, two areas in which he said Tesei has been lacking.

“I think there are issues in the town,” Litvack said. “You walk down Greenwich Avenue and you see 27 empty stores. You drive through town and you see our playing fields are torn up or closed. You can get stuck in traffic for hours driving down East Putnam Avenue. How are you going to address that? We have to deal with these issues in town and we need a plan to be able to do it. Peter Tesei doesn’t have one.”

Litvack said his experience as a high-ranking executive for the Walt Disney Company taught him how to spot problems and solve them.

“I know how to do this,” Litvack said. “I’ve been doing it my whole life.”